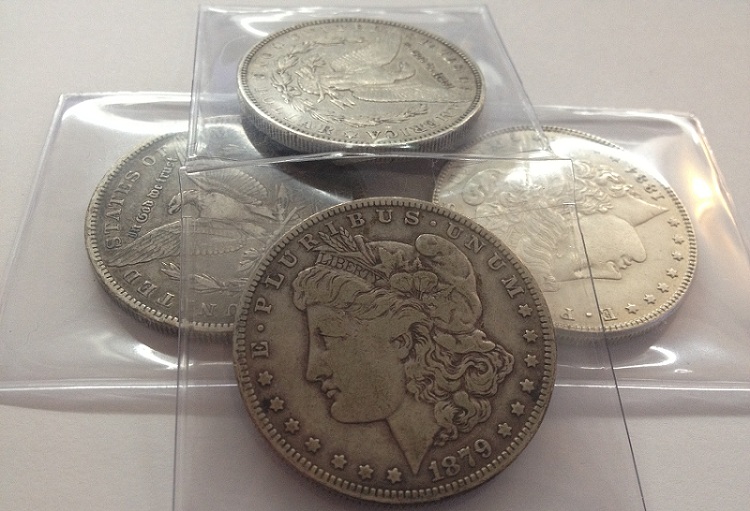 Total Time Spent on Investment: Around an hour spent in a coin store talking to the owner and then running to the ATM to withdraw money to purchase the coins.

Research and Preparation:
In the weak economy we now live and a world rife with struggle and uncertainty. Many people like to flock to investments that they they believe will hold value even if they economy and world at large falters. This has caused the price of both gold and silver to sky rocket over the past few years. I wanted in on this action as an investment to hedge against my more immaterial stock investments I had already made.

For a while I had been talking about trying to buy gold and silver. I had even gone into a place that said “We Buy Gold,” only to find out that the display cases were filled with items for display only and that they did not actually sell anything in their store. I was a little distraught and even told my sister how annoying it was when she had come back to visit for a weekend. As she left I got a text, I thought maybe she was texting because she had forgotten something but instead it said this:

(A very helpful text)
Wow — this must have been a sign: a store had opened in my own town that claimed to sell gold, silver, and collectibles. A couple of weeks went by before I had enough time to actually stop in and visit the store but finally on a Saturday I went in.

The store was unassuming and barren of any items except for three display cases near the back and behind that a desk with a man reclining in a chair. His name was Howard. I said hi to him and told him I lived in the town and ran a website called Alt Investments, where I made $100 investments, and that I would like to buy $100 worth of gold if possible. Howard was nice and understanding and I think was happy to see such a young person interested in something as boring as gold and silver collecting. He had just recently opened his store in my town but made the bulk of his money from going to coin shows instead so he wasn’t too bothered yet by the limited foot traffic.

Over the next hour we talked about a lot of things: he discussed the importance of saving, how kids aren’t into it, how he had a plan to hand out little Indian pennies to all of the school children in town to get them interested, and perhaps get their parents to come to his store to buy more expensive items.

He mentioned how he too lived at home until he was twenty five and instead of moving out into an apartment went right on to buying his first house, something I wish I could do one day also. This led us to an in-depth discussion of the housing bubble and why the prices should have dropped at some point.

After talking for a while I broached the subject that I wanted $100 worth of gold, but unfortunately the smallest amount he could sell was a tiny speck of a coin, the size of a dime, and that was worth $250 on the spot price of gold, far outside of my $100 per investment cap. Howard also told me that the tax was a killer, since due to New York laws there is tax only on gold purchases of $1,000 or less. Meaning that the more gold bullion I bought the better off I would be.

So with gold being out of the question I asked about the rest of his wares. The sparsely filled cases had rolls of silver coins and a couple of coins in protective plastic cases. The big coins were Morgan Peace Silver Dollars. Howard took a couple out and placed them on the counter in front of me.

What is of note is that we had just calculated the MELT price. Which is the amount you could be paid based on the spot price of the metal in the coin if you melted the coin and sold the metal.

Howard explained that most coin stores buy the coins at about $2 below melt, and then sell them for $3 or $4 above the melt price. Meaning the Morgan Dollars he had in his case he would sell to me for about $28 or $29 each, and would be them from me for about $23.

Of course that is just the prices on circulated unrare Morgan silver dollars. On the rarer and uncirculated ones you get them rated by a third party service (PSG) and then they are sealed in plastic cases. Rated coins are priced by a buying and selling guide that coin merchants can subscribe to. They typically sell for $60 to $90 each. I ended up buying one. You can read more about that in my article on my investment in coins. (HERE)

While we continued to talk Howard gave me a quick history lesson on Morgan Peace Silver dollars. They were first minted back in 1878 and production continued 1904 and then they were on hiatus only coming back for one more year in 1921, to celebrate the end of World War I. The rarest issue of the coins came from the 1895 Philadelphia issue, which only minted 880 coins.

The design for the coins was by George T. Morgan, hence the name Morgan silver dollars.

On the front of the coins is the phrase “E PLURBUS UNUM,” meaning “out of many, one.” This is a reference to the original states coming together to form one nation. This was especially important since the Civil War had only just ended in 1865, and a Congressional Act from February 12th 1873, had required all coins to contain the phrase.

Also, the woman on the coin has a head band with the word “Liberty.” She also has cotton and grain stuck behind the head band, both of which reference the two cash crops of the North and the South respectively. What a lot of people may notice is the weird hat on top of the female’s head, this is actually a pileus. Or a symbol for Libertas, Latin for liberty. The pileus was a felt cap worn by freed Roman slaves. This too was a subtle reference to the just ended Civil War and the freeing of the slaves.

On the reverse of the Morgan silver dollar is an eagle clasping arrows and an olive branch in its talons. Symbols of war and peace respectively. Above the eagle is the famous “In God We Trust,” since as Howard mentioned “we are a religious country.”

After seeing the coins and holding the coins I wanted them. Unfortunately the retail price per a coin was $28, which would have made my total cost for four of them $112. However after talking to Howard for so long I got creative and offered him $200 for a total of two investments $100 for four of the Morgan dollars, and $100 for a coin set and a graded Morgan dollar. The other coins would become my investment in coins which you can read about here.

Howard agreed to the deal even though he meant he was selling me the coins at his dealer price, he was happy to help me out and he even ate the tax on the deal, so the total cost to me for both investments was just under $200.

So I ran to the closest ATM and withdrew $200 in cash to buy the coins.

(Receipt from the coin store)

(Four Morgan dollars please)
If you aren’t as lucky to have some one at the store cut you a great price try buying your coins from a coin show. Howard said the majority of his business happened there. Also, don’t ever buy online, as they will charge you such a high premium that it would be almost impossible for you to ever profit from the coins.

Below are closeups of the four Morgan peace silver dollars I purchased.

(1904 Morgan Peace Silver Dollar Front and Back)
Reason for Investment:
Chock full of history and composed of 90% silver, the Morgan peace dollar has become a highly collectible and in recent years valuable coin. With the price of silver per an ounce sky rocketing from $6 per, to $30 today, it has provided a great return to those who have owned it during the past risky and uncertain years. And with the economy still uncertain I decided to buy some of my own. I was able to buy four of them for $100 or $25 each. Around the MELT price. This investment provides a good balance to my other stock investments, since even if the market tanks silver and other precious metals should continue to go up.

To find an up to the minute price of this investment and my other investments click here!

To Invest to Stocks or Not to Invest: What’s Your Final Verdict?

Investing in a Money Market: A Waste of Time or Not?